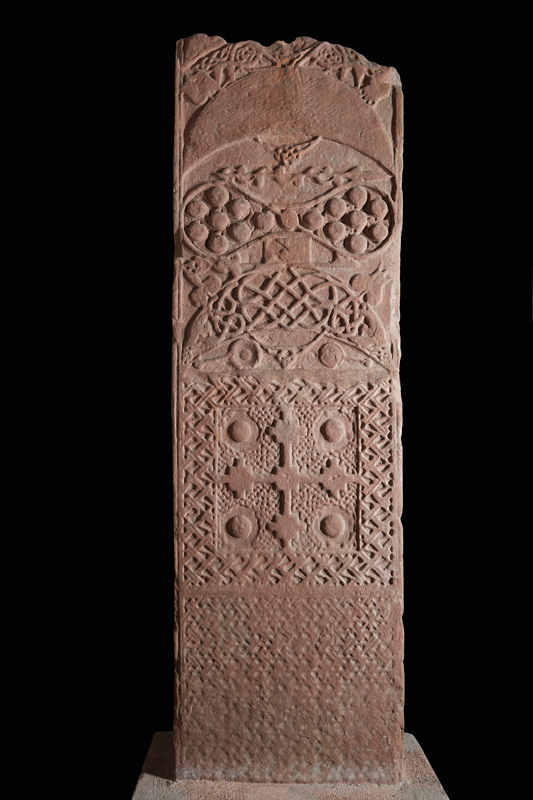 Groam House is an award-winning, independent museum in the seaside village of Rosemarkie on the Black Isle. We are situated on the High Street, on what would have been part of an important early Christian monastery enclosure 1250 years ago.

Our centrepiece is the magnificent 2.6m high Rosemarkie cross-slab, an 8th century sculpted stone elaborately carved with enigmatic Pictish symbols and Christian crosses. It’s one of the most impressive and important stones on The Highland Pictish Trail. If you’ve never seen it, we guarantee you’ll be amazed at the intricacy and skill of the carving. It makes you realise what an important early Christian site Rosemarkie was.

In addition to the Rosemarkie cross-slab and other Pictish sculpted stones, Groam House Museum cares for the collection of Celtic Art teacher George Bain (1881-1968). He was an inspiration for all lovers of Celtic design and his collection is now officially recognized as being of National Significance.

We also have a small but important local history collection consisting mainly of photographs and documents but including a treasure trove of archaeological finds dating from prehistoric times to the 1800s.

We are a registered charity, managed by a Board of Trustees and advised by museum specialists. We are determined to keep free entry to our museum therefore we rely on donations, fundraising events, shop sales and membership fees to survive. Our small part-time staff team is helped by a lively, enthusiastic group of volunteers and we all work together to achieve our mission:

to offer our visitors and followers a window into a past world, bringing our objects and their stories to life through our permanent displays, exhibitions, events and activities.

A BRIEF HISTORY OF THE MUSEUM

In 1974 Mario Pagliari of Rosemarkie gifted Groam House, an 18th-century building, to Fortrose Town Council. A few years later the District Council took responsibility for the building, to ensure that there would be a safe location for the Rosemarkie Pictish cross-slab, the iconic focus of the village and today’s museum.

By 1981 the building had been completely altered and the cross-slab conserved and moved into the premises. Groam House was opened for the summer months, overseen by a local committee. The following year Betty Marshall was employed to welcome visitors. Pictish sculpted stones were moved from Rosemarkie Church so they could be displayed alongside the cross-slab. Committed to a long-term future for the museum, local people started to donate objects and photographs relating to this part of the Black Isle.

For more than ten years Betty Marshall ensured the growth of visitors and the collection, such that, in 1992 the Council agreed to enlarge the display space. A mezzanine floor was inserted and much of today’s ground floor display was created. Groam House became the Pictish Interpretation Centre for Ross & Cromarty.

Susan Seright joined the museum at this time, initially as an assistant, and became curator on Betty’s retirement. Major steps were taken over the following decade. The museum achieved registered status (now known as accreditation) which enabled the new Trust to apply for specific grants. Accolades for the most improved rural museum in the UK and work on the conservation of items in the collection were awarded. Annual Academic Lectures were organised, focussing on aspects of Pictish studies. Exhibitions were developed on local themes and one of these was supported by the family of George Bain.

George Bain had studied the method of construction of Celtic Art between the two World Wars. After WW2, when he moved to Drumnadrochit, started to promote the establishment of a College of Celtic Cultures. This didn’t materialise but his fascination with these complex artistic forms continued. His drawings reflected the style of sculpture on display in Groam House and some were borrowed for the museum’s 1997 exhibition. Following this, the family felt the Groam House would be a fitting place for his archive, as well as his numerous other sketches and paintings unrelated to Pictish art.

A major Heritage Lottery Fund grant was awarded in the mid-2000s and with grants from a number of sources, a major five-year programme of outreach projects, exhibitions at various venues across Scotland and collection acquisitions were undertaken. Following on from Susan’s in-depth work and successes associated with the George Bain material, (she left in 2012), Groam House applied for and was awarded Recognition of the George Bain Collection as a Nationally Significant Collection (by Museum Galleries Scotland on behalf of the Scottish Government).

Over the last 40 years the museum has thus developed three areas of collecting:
– Pictish stones from Rosemarkie and its environs
– Prehistoric, historic and local history items from this part of the Black Isle
– The George Bain Collection and related Celtic Art items
which it aims to share in imaginative ways with volunteers, members, visitors and a wider public via the engagement projects, exhibitions and digital media, while ensuring the long-term care of the collections.

Today, Groam House Museum continues to inspire people of all backgrounds and ages to enjoy and understand its collections and develop associated skills. By working with others locally and nationally, we strive to conserve and bring to life the objects and their stories through related activities, arts and crafts.

With grants from bodies such as the National Lottery Heritage Fund (HF), Museums Galleries Scotland (MGS), (Association of Independent Museums) AIM, and Creative Scotland (CS) we have continued the long tradition of Groam House Museum of enabling local people to research and organise our annual exhibition, get involved in craft and art workshops, and learn new skills associated with the digitisation of the collections.

The museum is a Scottish Charitable Incorporated Organisation and its constitution can be downloaded here.

The following papers were presented at recent Annual General Meetings.